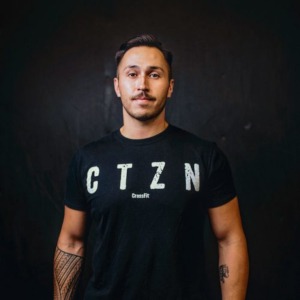 I’m Andrew (AKA “Mandrew”). I’ve always been an active person, from snowboarding, skateboarding, a stint playing semi-professional paintball, and High-School football. I joined the Marine Corps in 2011. I also studied Brazilian Jiu-Jitsu and Muay Thai in my free time, competing in grappling tournaments and attaining a Black Belt and Instructor Certification in the Marine Corps Martial Arts Program. I also use Crossfit as conditioning for club level rugby with the Oceanside Chiefs.

In an effort to become a better leader, I started doing Crossfit in 2012. I was finally able to attain 20 strict pull-ups within 3 months of Crossfit training and since then I have been totally convinced by the methodology. During a deployment to Afghanistan in 2014, I trained daily and even began shadowing instructors at Crossfit Leatherneck. In September 2014, upon returning to the states, I obtained my CF-L1 at CrossFit Del Mar. Since then I’ve gone on to coach at Ballast CrossFit for 3 years. I have experience with over 500+ athletes, from high-level CrossFit Competitors, college and recreational athletes, mothers, fathers, seniors and teens. In September 2019 at CrossFit Humanity I Obtained my CF-L2

I am absolutely convinced that Crossfit is a great foundation for any level of fitness and believe CrossFit is made for everyone, as long as they are willing to give it a try. It is not the answer to everything, but rather, a gateway to a life of health and wellness.